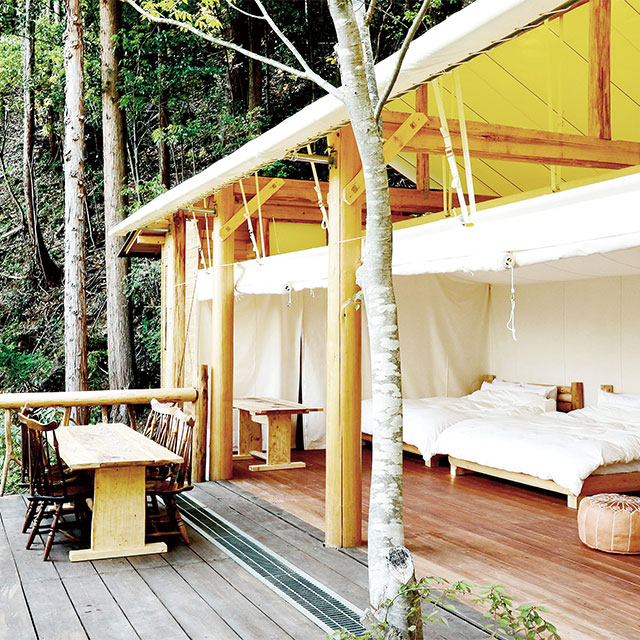 Woodland Bothy means “The little hut in the woods”, which is a place where we go to get relief from the miscellaneous stresses of everyday life. Climbing the mountain for about 30 minutes, an unexplored region appeared at last. Having the special experience where the master chef serves a special meal by himself, is provided to only one group per day. First to see is a glamping auberge (woodland inn), and then in addition can be found traditional Japanese style housing facilities and camping sites (both are limited to one group per day). Here you can refresh your mind and body with clean air and delicious food surrounded by quiet nature that you cannot imagine in Tokyo. 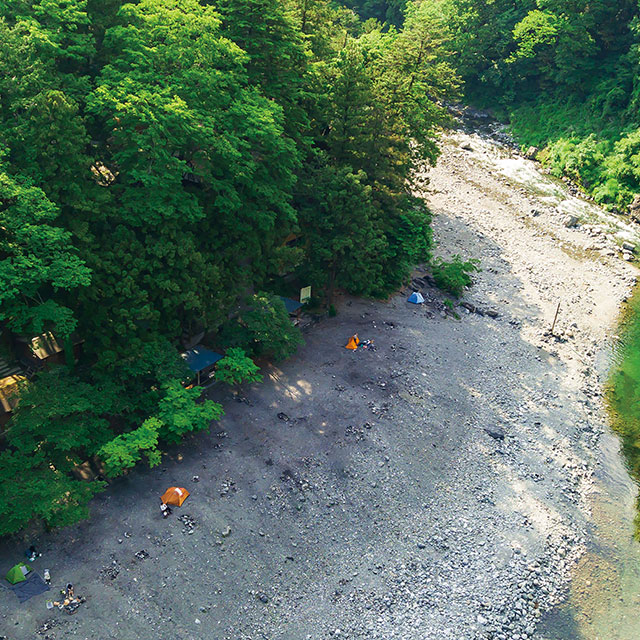 As Hikawa Campsite can be reached from Shinjuku by train without any transfers make it quite accessible. All campers, including families and individuals may visit. BBQ and bonfires are also possible at the free site where you can freely lay out camping gear. You can experience canoeing and kayaking classes nearby, providing more opportunities to enjoy nature to the fullest. 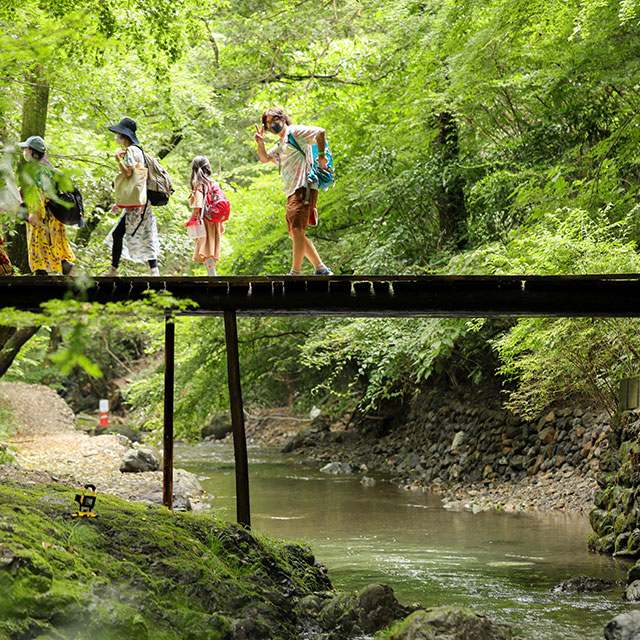 This location is about a 20-minute walk from Musashiitsukaichi Station. Fukawasawa-kei Valley Shizenjin-mura Village is a craft village surrounded by nature, where you can easily choose and set up a campsite with an accommodation style of either a bungalow or your own tent. Although it is a campsite, it also has a working space. You can enjoy both work and play at once. How about spending your relaxation time in the middle of nature. 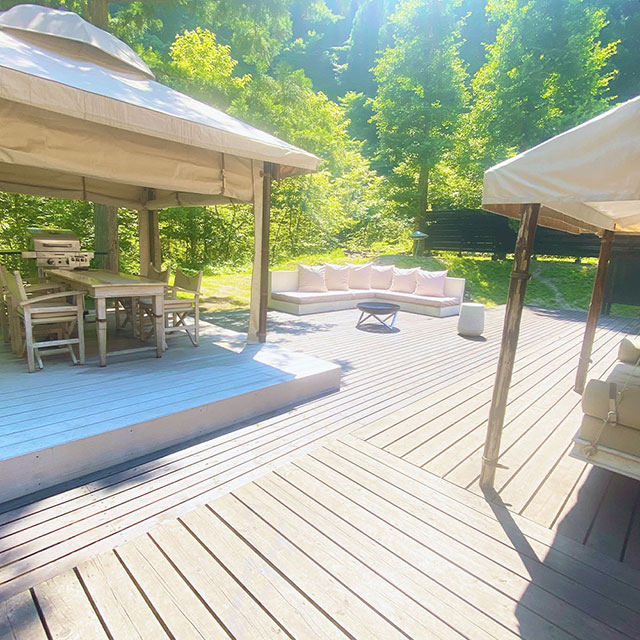 “KEIKOKU GLAMPING TENT” in Hinohara-mura Village, in the westernmost region of Tokyo, is a glamping facility for escaping the hustle and bustle of the city and enjoying nature to its fullest. You can enjoy extraordinary experiences in a tropical resort-like space, such as canvas fabric camping tents and forest style interiors.

Close your eyes and take a deep breath. What you can hear is only the sound of the leaves of the trees swaying and the murmuring of the Akigawa River flowing by. There are two tents on the site where the cool breeze blows through, and their privacy is perfect. If you go to relax a little bit, you can play in the river, go trout fishing, hiking and trekking. Enjoy yourselves to the fullest in nature with your friends and acquaintances. 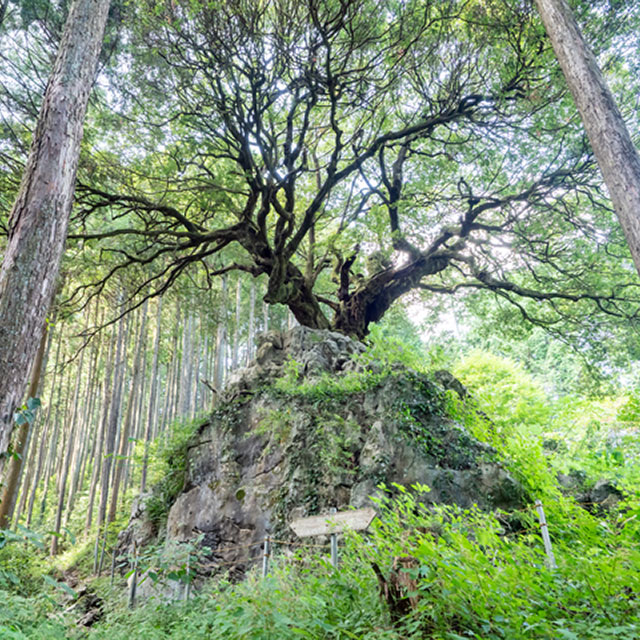 Yamagaki-no-Ookashi is the great Oak tree designated as a natural monument in Akiruno City. Quercus Salicina, a large tree that has strong roots in huge rocks, is said to be over 300 years old and appears overwhelming. The appearance of standing on the exposed limestone with roots gives the impression of embracing the entire mountain, so it has come to be called the “Yamagaki-no-Ookashi”.  The small ridge on which the oak grows overlooks the mountains and villages in the Fukasawa area, making it look as if a giant tree is watching over the village. 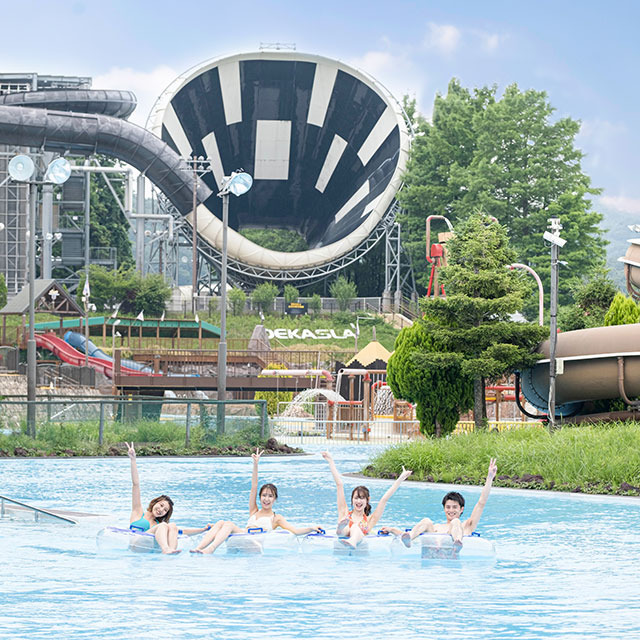 Tokyo Summerland is an amusement park that mainly has indoor and outdoor pools. It is a very popular spot for children and adults with a variety of aquatic attractions such as Japan’s largest flowing pool and a pool under a dome where you can play without worrying about the weather. Above all, the thrilling water attraction “DEKASLA”, where you are thrown into a large conical course and sucked into the center while sliding left and right. This attraction is sure to get everyone excited when you participate in a group. 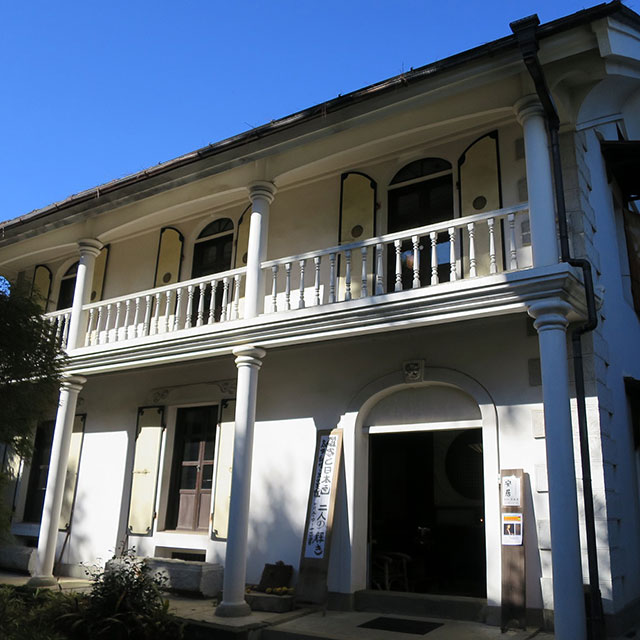 Kozukue-ke-jutaku is the oldest Japanese-Western eclectic house in Itsukaichi. It is said that it was built around the 8th year of the Meiji era by a Kozukue-ke family who made a fortune in the forestry Industry in the latter half of the Edo period. It is said that the 7th owner Kozukue Sanzaemon, who built this house, was greatly inspired by the Western-style architecture of the Ginza-rengagai (Ginza Brick Town) of the Meiji era, and was built to imitate the Western-style colonnade and the second-floor balcony. It is open to the public only during the Tokyo Culture Properties Week period around November 3rd, but you can enter the café inside the building even outside this period. 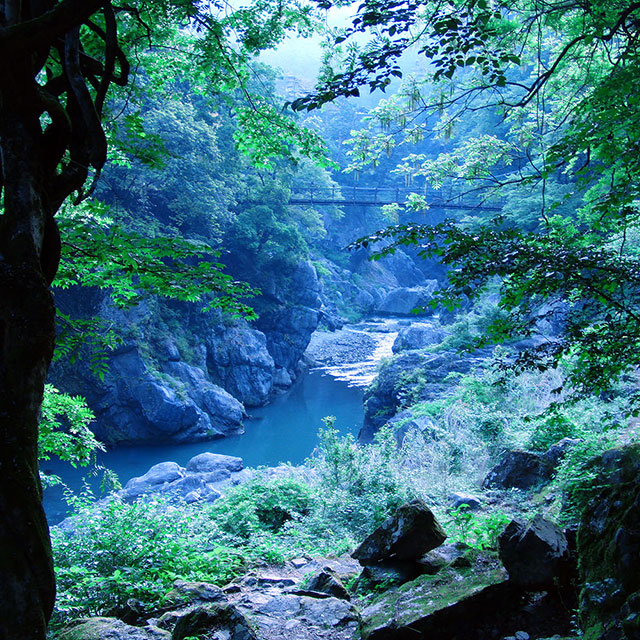 Hatonosu-keikoku Canyon is about a 10-minute walk from JR Hatonosu Station. Cross the Ome-Kaido and head downhill to Hatonosu-keikoku Caynon. The clear stream of the Tamagawa River winds along the gorge formed by gigantic and ancient rocks. It is said that the place name of “Hato no Su (Pigeon’s Nest)” is derived from the fact that a pair of friendly pigeons made a nest at the nearby Tamagawasui-jinja Shrine and then people came to call this area by that name. If you go to the left in front of the suspension bridge (Hatonosu Kobashi), you can head toward Kori, and if you cross to the opposite bank, you can head toward Shiromaru, all while enjoying the beauty of the valley. 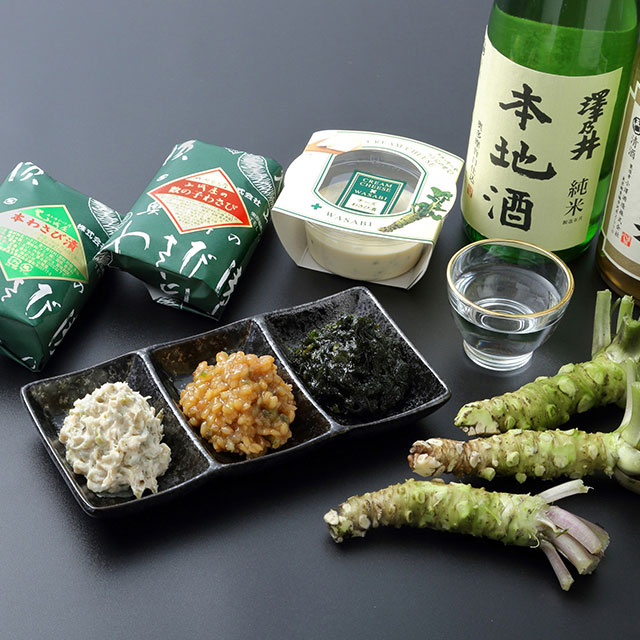 Wasabi is a specialty of Okutama, the Okuzashiki (living room) of Tokyo. Yamashiroya sells Wasabi-zuke (Wasabi pickles) that use plenty of fresh Wasabi from Okutama. Wasabi-zuke, which has been made here for 75 years is created by a carefully cultivated traditional method and is very popular with side dishes and sake. It has a rich repertoire as a flavoring on such items as cheese Wasabi pickles and kazunoko Wasabi.  This makes it a perfect souvenir to bring from Okutama. 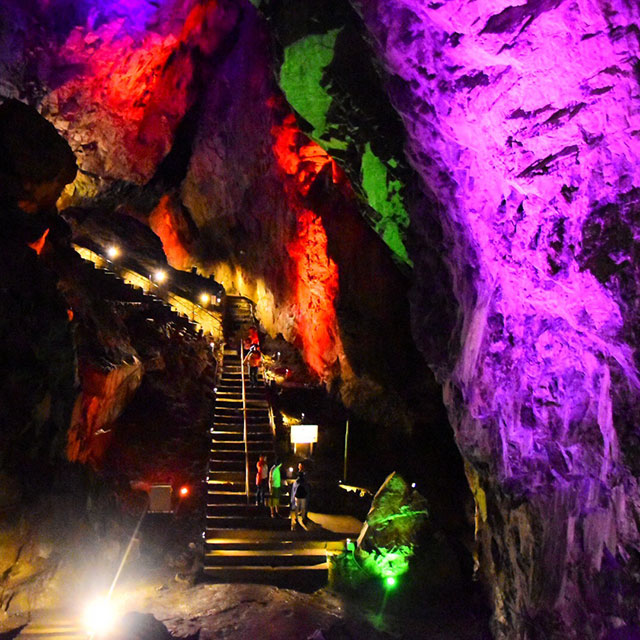 A mysterious cave in Ogawadani from which springs a tributary of the Nippara-gawa River. At the Nippara Limestone Cave, the largest such cave in the Kanto region, you can enjoy fantastic scenery such as the majestic Byakue Kannon (God of Mercy) and the cattail rock reminiscent of a huge frog. The newly opened cave passages where many stalagmites and stone pillars are scattered about makes you feel like being in another world.

Underground inside the cave the temperature remains at a cool 11 degrees Celsius throughout the year. Here you can spend both a cool summer and a warm winter. We wish you to come experience the art of nature created through many thousands of years. 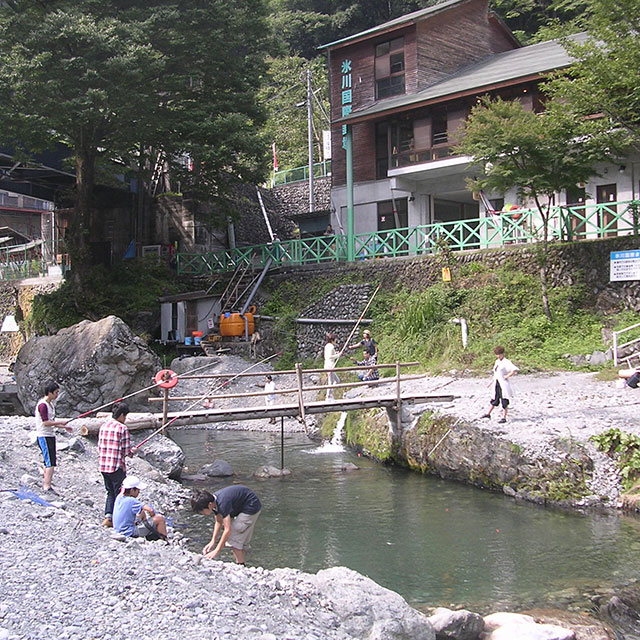 Hikawa International Fishing Spot  is a fishing spot located a 5-minute walk from Okutama Station. They also lend out rods, so you can arrive without needing your own gear. With the motto “close, spacious and safe” the area can be enjoyed by anyone from small children to the elderly. All may enjoy fishing safely. There is also an outdoor barbecue, so you can grill and eat the fish you catch on the spot. Why don’t you enjoy some leisurely fishing in the mountain streams of Okutama? 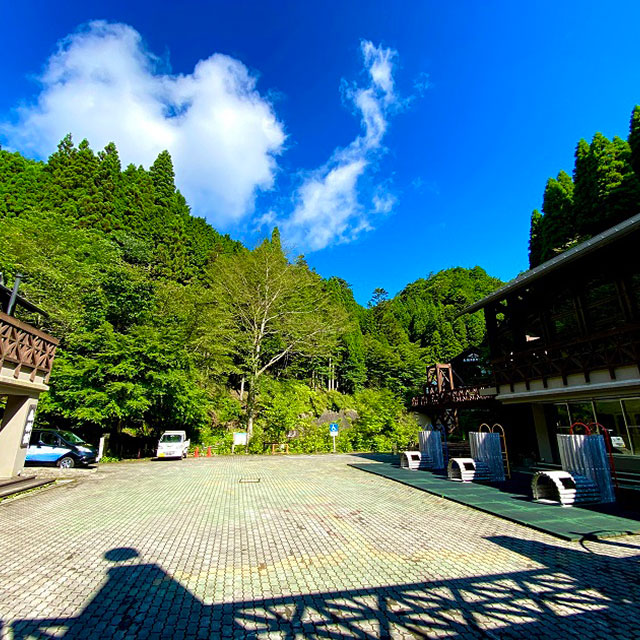 At the foot of Mito-san Mountain, the highest point of Okutama-sanzan (three mountains of Okutama), Hinohara Tokyo Citizen’s Forest is a mountain park where you can feel close to nature. Mito-Otaki Fall, a famous place in Hinohara-mura Village, flows through the park. Here you can approach the waterfall with its height of 35 meters.

The promenade, which is crowded with hikers and tourists, is registered as a therapy spot, and hiking while feeling the greenery and fresh air is recommended. The Wood Craft Center and Bird Watching Hut are full of nature related events where one may discover new things throughout the four seasons. 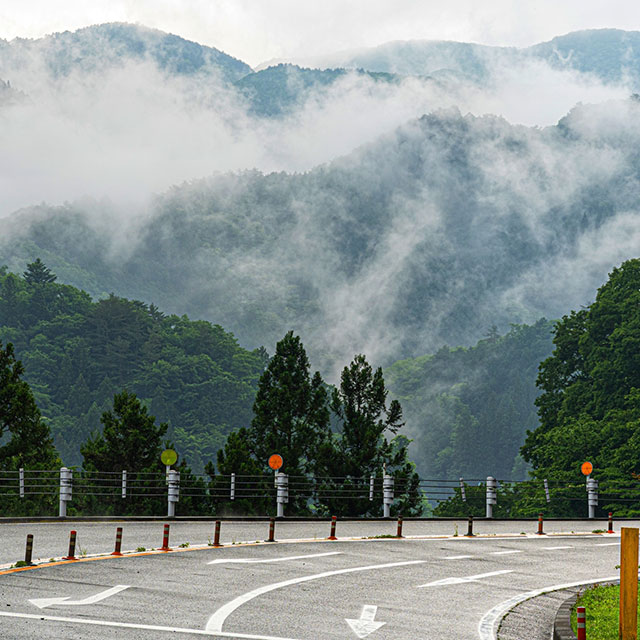 “Okutama Shuyu Road” is popular as a drive and touring course in Okutama. It is a 19.7km long prefectural road that connects Okutama-machi Town and Hinohara-mura Village. You can see the full fantastic views created by the natural beauty of Okutama Lake and the city where people go about their lives in the distance.

In recent years, this road has been used for bicycle races in the Tokyo National Athletic Meet and others organized by local governments, so it is becoming more popular as a bicycle course. Why don’t you enjoy the scenery of each season while riding along the winding roads through the mountains. 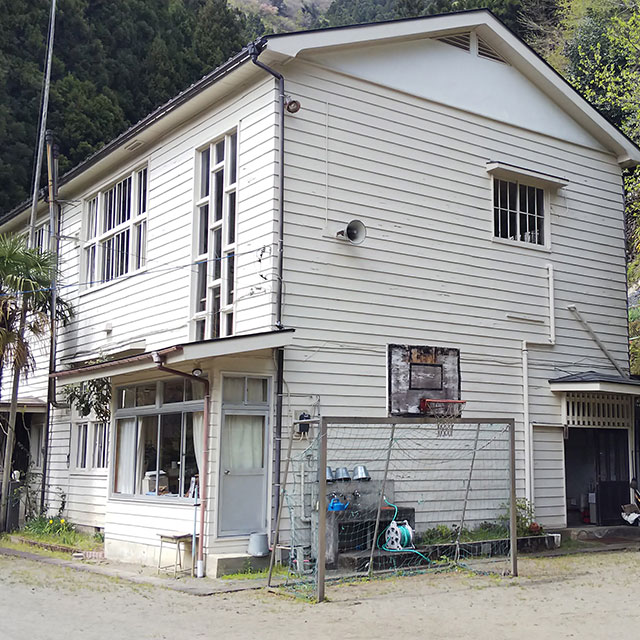 A Bunko (branch school) is an educational facilty built separately from the main school so that children can attend school in areas where transportation is inconvenient. In Hinohara-mura Village, the educational facility and predecessor of the current elementary school, Kazuma Bunko was built as one of these and was part of the school system during the Meiji era. It has been loved as a school for children for 125 years.


The current Kazuma Bunko Memorial Hall was built in 1959 and was used as an actual school building until 1999. If you step into the memorial hall, you will surely feel nostalgic. Lookng back on those days when you were facing the blackboard may be seen as one from of adventure.