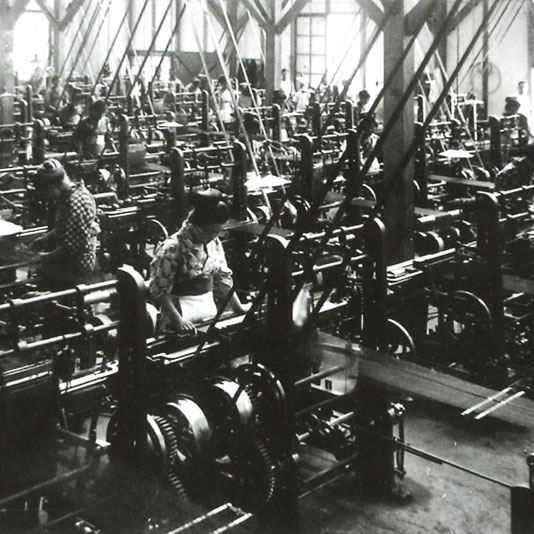 Hachioji, known as the Mulberry Capital “Soto”, has since ancient times been a center of sericulture and textile manufacturing. Due to the lack of farmable land in this area, sericulture and textile manufacturing became important sources of employment for farmers. From the Meiji Period (1868-1912) to the beginning of the Showa Period (~1913), Hachioji was not only a leading area for production, but also very successful as a result of its position as a relay point for goods heading to Yokohama for export.

At the end of the Second World War, Hachioji’s textile industry faced a dire future due to the war’s impact on exports and bombing raids. Although there were only a few factories left standing at the end of the war, with financial backing of the government, the industry showed some signs of recovery. Clothing that had been hard to find during the war sold well, and wool-based “Mon wool” became a post-war hit product.

Hachioji’s textile industry’s source fabric, “Tama-ori” was designated a traditional craft product by the Ministry of Commerce in 1970. A monument to silk, the “Kinu-no-Mai,” stands in front of the current Hachioji station, welcoming all visitors.