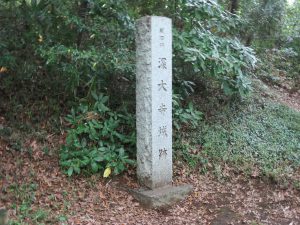 Jindaiji-jo-Ato received its national designation in 2007, and is a historic site in the Aquatic Botanical Park, part of Jindai Botanical Park. During the battle between Odawara Hojo and Ogigayatsu Uesugi for the hegemony of the Kanto Area in the Warring States Period, Jindaiji-jo was, according to record, built on older castle ruins in a position that was opposed to Ozawa-jo Castle which was governed by Ogigayatsu Uesugi, and was one of the bases used by Odawara Hojo.